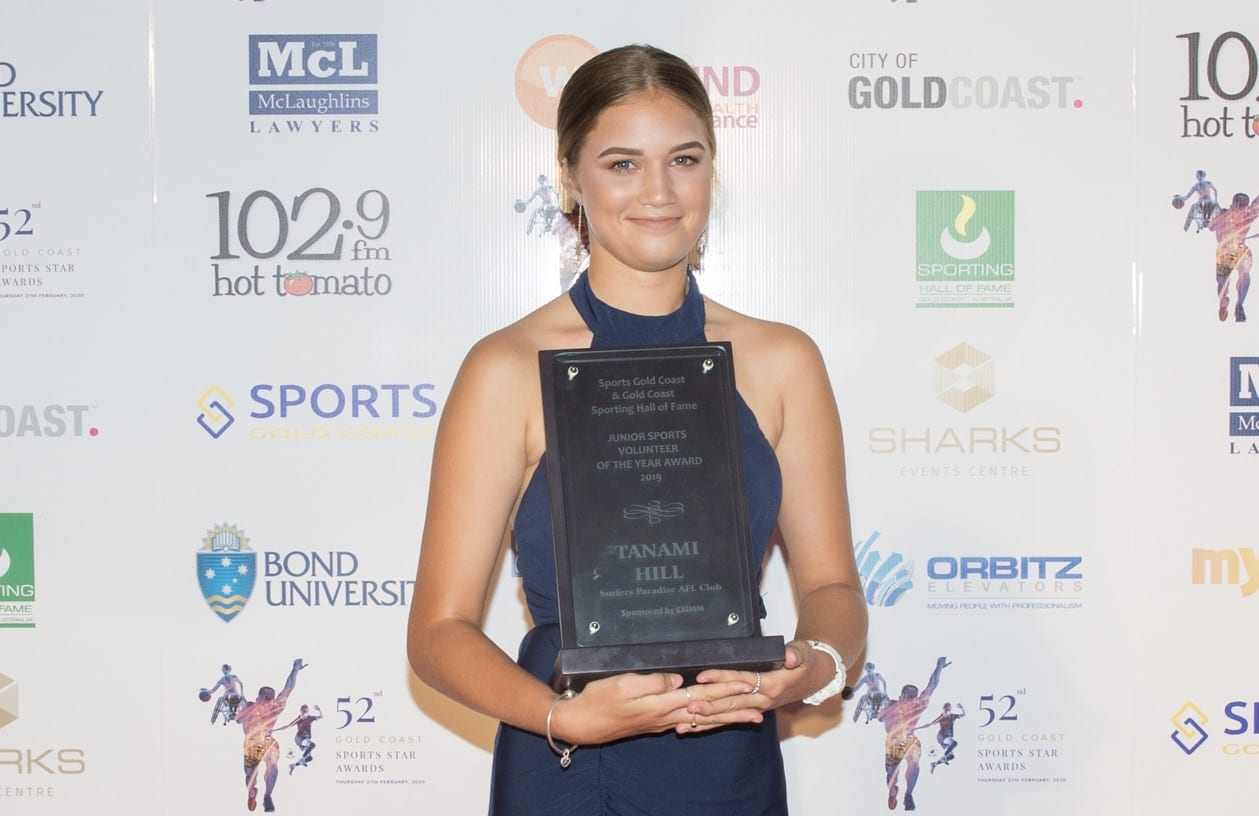 Tanami Hill has been named the Gold Coast Junior Sports Volunteer of the Year at the 52nd Gold Coast Sports Star Awards, in the company of international sporting superstars & local dignitaries.

They say a sporting club is only as good as its volunteers, and if that is the case we can expect the Surfers Paradise Demons to take out a few more flags in coming years, boasting a junior volunteer like Tanami Hill.

The 15-year-old is a shining example of the community spirit that is needed for a successful grassroots club, working tirelessly throughout the AFL season to – as she puts it – “do her bit” for the club she loves.

The Miami High School student certainly doesn’t put in the hours for accolades or pats on the back, but she sure does deserve them, with it being Sports Gold Coast’s pleasure to recognise her work at the 52nd Gold Coast Sports Star Awards.

Tanami was named the Eximm Junior Volunteer of the Year this evening for her contributions to the Surfers club over the 2019 calendar year, embodying the great values the award has come to represent.

The vast extent of the philanthropic youngster’s good deeds cover a multitude of tasks at her beloved football club, ranging from selling raffle tickets, to running water, to setting up playing fields, umpiring and cleaning change-rooms.

In between these tasks she still finds time to play her own games – and play them very well mind you – excelling for her Demonettes side and recently making the rep squad.

Vicki Todd, the CEO of philanthropic Gold Coast business Eximm proudly presented the Award and said it was an honour to reward Tanami for all of her hard work.

“There’s not many volunteers anywhere that would do more than Tanami, let alone juggle her playing and school commitments as well,”

“It is fantastic to be able to recognise her for her contribution to her club, but also the spirit she represents, embodying the values of the Gold Coast sporting community.”

Surfers Paradise Junior Director Dean Odewahn might just sum up Tanami’s feats best by saying “she always gets the job done, never complains and ALWAYS has a smile on her face!”

And what a thrill it was for the 450 strong crowd at the Southport Sharks Venue to see that smile on stage last night, in what is sure to be a fan favourite moment of the 52nd Gold Coast Sports Star Awards.