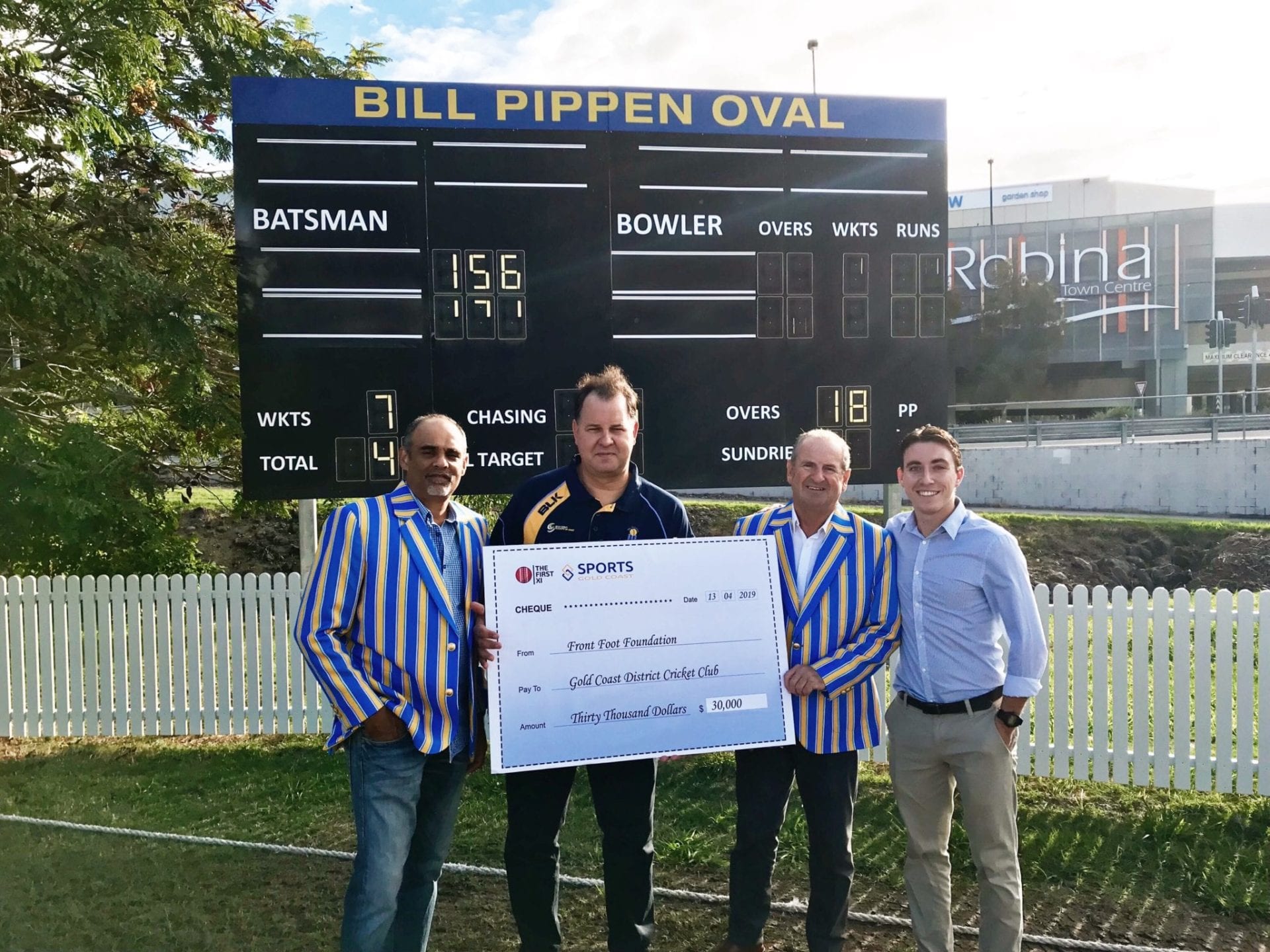 Visions of the Gold Coast as a world-class cricket destination have received a further boost following Sports Gold Coast’s presentation of a cheque to support renovations at Bill Pippen Oval in Robina.

The $30,000 was fundraised through Sports Gold Coast’s Front Foot Foundation, and presented to the Gold Coast District Cricket Club as they push to transform their suburban ground into a feasible venue for first-class cricket.

With initial renovation plans already in place, the club is relying on external relationships, like the one with Sports Gold Coast, to obtain the substantial funds needed to improve existing facilities.

“There is a massive untapped opportunity for Australian cricket on the Gold Coast, as we’ve seen already with the Big Bash and International games played here – the upgrades to ‘Bill Pippen’ are the next step,” Mr Pfaff said.

“Renovations would allow us to host domestic fixtures, first-class women’s games and attract quality cricket content as the support ground for what is a world-class venue in Metricon Stadium.

“The Front Foot Foundation is aiding us through facilitating the joint support of our grassroots and corporate communities in improving cricket on the Coast.”

While this donation represents only a small portion of the funds needed for the project, Mr Pfaff believes that along with existing support from the Queensland Government and Gold Coast City Council, it will go a long way to generating further backing from vital organisations like Cricket Australia.

The Front Foot Foundation was implemented late last year as a means to unite like-minded members of the local community, dedicated to supporting cricket on the Coast.

The Foundation has a target of $750,000 to raise over three years to match both council and state government funding for the upgrades of facilities at Bill Pippen Oval.

The upgrades to the Robina venue will see it reach Tier 2 accreditation as the supporting venue to Metricon – much like the Allan Border Field & Gabba relationship in Brisbane.

Founding Front Footers are largely to thank for this first donation, with plans to create a Front Foot First XI that will help provide direction to SGC’s cricket project and receive unique benefits like playing a game on Metricon Stadium.

Foundation members Ajay Amin (Ezi Office Supplies) and Colin Wheeler (Document Solutions) were there to present the cheque, along with Luke Ireland (Bond University Master’s Graduate) representing Bond University – another vigorous supporter of the initiative, with John Davis (McDonalds) the other key member of the project to date.