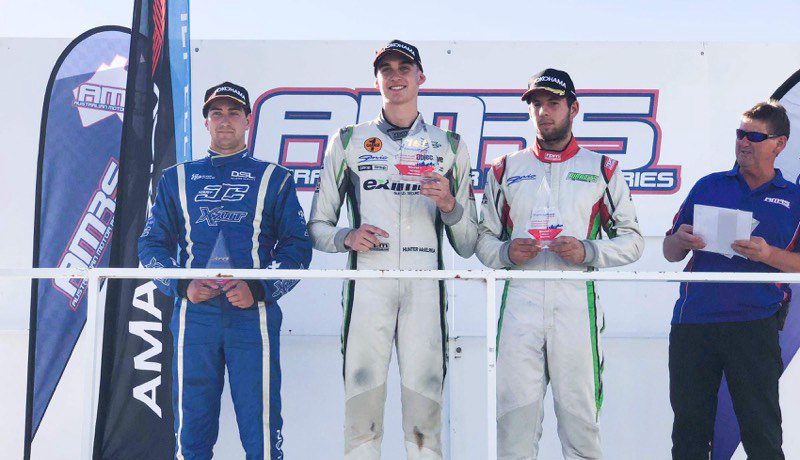 The 18-year-old won all three races of the opening round at Victoria’s Winton Raceway, confirming a growing maturity.

“Last year I was quick, but made too many mistakes,” he says. “This year it is about not making mistakes and using speed properly.

“Also, I worked hard in the off-season on my fitness. I was confident I could do well at the weekend, but it just shows what can happen if you don’t make mistakes.”

McElrea’s career momentum continues to build. With a family tree steeped in motor racing, he had a proven karting background before stepping up to Formula Fords last year and placing fourth overall.

This year he left the family home and moved to Melbourne to be closer to his race team, Sonic Motor Racing Services. However his dream is to be racing in America next season.

“The dream is to be an IndyCar driver,” he says.

“I hope to win the Formula Ford Championship, then the Global Shootout and be racing in America next year.”

The Global Shootout – Mazda Road to Indy $200k Scholarship Shootout – is one of the most exciting and sought-after drives for motor racing aspirants. About 20 young champions from around the globe race off in the USA late each year in the event.

The winner receives a $200,000 scholarship towards the eventual goal – progression through to the IndyCar series and a drive in the Indy 500.

McElrea’s dream is not without foundation. Other then turning heads at home he has already etched some points State-side.

Late last year he was part of a two-day Mazda Road To Indy test on the Indianapolis road course and was the fourth fastest overall.

For now his focus remains on the Australian Formula Ford Championship, with the next round back ‘home’ at the Queensland Raceway on April 20-22.

McElrea is the son of Porsche Carrera Cup Australia team owner, Andy, who had his own celebrated career, which included two New Zealand national championships. He was also a two-time winner of New Zealand’s most prestigious motorsport award, the Jim Clark Trophy.

The latest of the racing McElreas, says family support is vital in his sport, but so is attracting corporate sponsorship.

“This is an expensive sport and you need plenty of sponsorship behind you to make it,” he says.

“But getting that support can be very difficult.”

One of McElrea’s staunchest supporters on and off the track is successful Gold Coast businessman Garry Goodman, who heads multi-faceted local company Eximm.

“We started sponsoring Hunter because our families are close,” says Goodman.

“But that was about five years ago, during his karting days. We have continued to support him, not just because of his obvious talent, but because he is a quality person, on and off the track.

“I have no doubt he will make it. You can tell by his attitude. His is driven, but humble. An absolute credit to his family.”

Goodman says more Gold Coast businesses should be supporting local sporting talent. He says this while wearing two significant hats. Not only is he a long-term supporter of local sporting endeavours, he is also a board member of Sports Gold Coast, an entity that is based around bringing business and sport together.

“The whole mantra of Sports Gold Coast is that if we combine sport, business, government, educational facilities and community we can achieve so much,” he explains.

“The winners are not just the athletes who receive the support, or the businesses that might get some profile out of it, but the biggest winners are the entire city. Sport continues to play a major, positive role for the Gold Coast.

“Every time one of our champions stands on a podium across the nation, or the globe, it is a win for the entire city. That has to start somewhere – and that is the grassroots sports. That is where support is needed the most, at the early growth stage. And it is not just the mainstream sports or just the young elite who should be getting this support. We have a diverse sporting culture on the Gold Coast and that is what is so attractive to so many people. It is one of the key reasons people come here and stay here.”