Brielle dives into a year of ‘Firsts’. 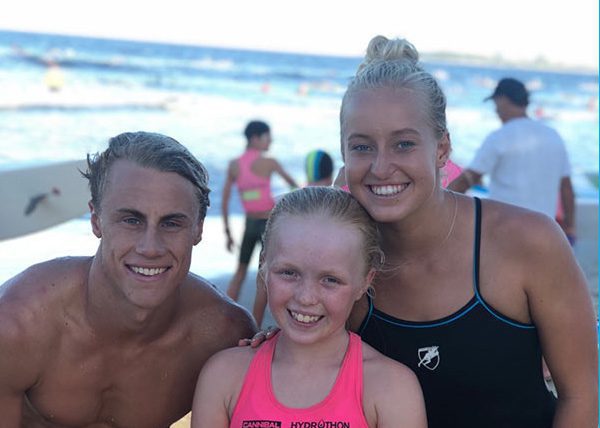 GOLD Coast ironwoman sensation Brielle Cooper has buckled up for what could be one of the most incredible 12-month rides in surf lifesaving history.

Last weekend the 18-year-old gate-crashed the Nutri-Grain Series, becoming the youngest ironwoman ever to take that title. In two weeks she contests the state surf lifesaving titles at Maroochydore. In April Cooper jets to Perth for the Australian championships at Scarborough. In November she will be part of her home club Kurrawa’s assault on the world surf lifesaving titles in Adelaide.

Dare to dream what this teenager will have accomplished by then.

If she keeps winning she is a strong chance of achieving what not even the legendary Karla Gilbert could – be named Gold Coast Sports Star of the Year.

Just over two weeks ago athletics champion Sally Pearson received that award – for the fourth time. However in the 50 years of the Sports Star of the Year not one female surf lifesaver has taken the prestigious crown. Four male lifesavers have – 1974 Alan Saxby, 1981 Mark Bennetts, 1990 Trevor Hendy and 2014/2016 Shannon Eckstein.

If Cooper can win the ironwoman grand slam – Nutri-Grain Series, States, Aussies and Worlds – she would be a warming favourite for the award. A Sally Pearson win at the upcoming Commonwealth Games would set up an intriguing ‘awards showdown’.

“What Brielle has achieved in this surf lifesaving season is amazing,” said Geoff Smith, chairman of Sports Gold Coast, who co-host the awards with the Gold Coast Sporting Hall of Fame.

“Her win, alongside that of her boyfriend Matt, are the sort of sporting stories you dream about.” (Brielle’s boyfriend, fellow Kurrawa clubbie Matt Bevilacqua, won the Nutri-Grain ironman title in an unforgettable day for the duo.)

“Sports Gold Coast is as much about the business of sport as it is about the actual competition,” he said. “What Brielle and Matt achieved showcases the Gold Coast in all the right ways. It sells the positives of this city and that exposure is priceless.”

When Sports Gold Coast spoke to Cooper (on Friday) she was ‘on duty’ at the state nippers titles at Alexandra Headland on the Sunshine Coast. She and Matt had been conducting skills clinics for the nippers, chatting to them about goal-setting, signing autographs and also checking in on the progress of Kurrawa competitors at the titles.

Cooper said she was remaining focussed on the next event and not looking too far ahead or getting too carried away with her series victory.

“It is not difficult staying focussed,” she said. “It is about soaking up the experience of winning and then heading to the states and taking it week by week. You keep training and then you come to the Aussies. After that we will have a short break.

“You can only do as much as you can and hope for the best.”

However in Cooper’s quieter moments she allows herself some self-satisfaction in what she has achieved in the past 18 months.

“I have realised a lot of my childhood dreams and got to experience some pretty cool things,” she says. “Twelve months ago to the day I raced in my first (Nutri-Grain) series race. And in 12 months I ended up on top. I thought it would take me five or six years to win a series.”

But her next year of achieving has only just begun. And there is a diminishing list to be ticked.

“I have never won an individual Aussie medal – so that is definitely a big goal of mine,” she says.

“And I am going to try to do the Molokai to Oahu paddle in Hawaii in July.”

And then of course there are the worlds.

A world title ticks another key box criteria. The Gold Coast Sports of the Year is almost always a world champion. Across the 50 years of the award almost every winner was the best in the world at his or her sport.

If Cooper does achieve the grand slam, there is every chance her ‘Plus one’ (Bevilacqua) at the next Sports Star awards dinner – February 22, 2019 – may also be a contender.

She said the pair we currently ‘living the fairytale’ after their individual series wins.

“It really was a crazy situation,” Cooper said, reflecting on the series finale at North Cronulla. “We woke up Sunday morning and made a little joke about how it would be pretty incredible if we both won – or if one of us won.

“For us both to win … it was the cherry on top. It really hasn’t sunk in. In fact I don’t think it will sink in until we finally get time to relax. Maybe after the Aussies.

“For now, we just look at each other every now and again and keep saying to each other: “Are you sure this really happened?”